The Queen Elizabeth Olympic Park has the monumental legacy of the London 2012 Olympic and Paralympic games behind it, which was described by the International Paralympic Committee President, Sir Philip Craven as "the greatest Paralympic Games ever". Clearly, the games not only set a benchmark for the Paralympic Games that followed but also created a massive shift in the public attitudes and perceptions of disability. London 2012, also inspired activism and advocacy initiatives and was the catalyst for Global Disability Innovation Hub’s (GDI Hub) inception, which has grown into a global force driving disability innovation for a fairer world.

GDI Hub has now become a founding partner of the #WeThe15 campaign, which launched on 19th August, just ahead of the Opening Ceremony of the Tokyo 2020 Paralympic Games. #WeThe15 is the biggest human rights campaign for disabled people ever and aims to bring together international organisations from the world of sport, human rights, policy, communication, business, arts, and entertainment to create a fairer world for the 15% of the world’s population that are disabled. We must listen to and amplify disabled people’s voices, share their experiences, and fight for a more inclusive and accessible world - so all disabled people can fulfill their potential and be active and visible. This is just one story of raising the voices of disabled people to the fore, the story of Vijay and Hasmukh, who are blind and residents of east London.

I first met Vijay and Hasmukh at the EPSRC Community Networking Event I organised in April 2021 where both of them showed keen interest in open space accessibility. I reached out to them to visit the Olympic Park together and to explore how the Olympic Park offers leisure and wellbeing to disabled residents in east London.

How Disabled People use the Park

Almost 10 years on from the 2012 games, the Olympic park continues to be a beacon of accessibility and inclusion for the communities that surround it. To learn more about how the park forms part of disabled peoples’ day-to-day lives, I visited the Olympic Park with Vijay and Hasmukh, two people with sight loss.

Vijay, 34, lives in east London and works as an assistive technology volunteer at Deafblind UK. Hasmukh, 66, lived in east London in the 80s and now lives in North London. Hasmukh is also active in the community and works at the Middlesex Association for Blind as a receptionist and provides telephone support to the charity members. Both Vijay and Hasmukh told me that they enjoy physical activities and fitness - both play bling cricket league and while Vijay enjoys extreme sports and outdoor activities and Hasmukh is a member of the Blind Rambling Club and enjoys long walks in local parks.

It was through Vijay that I learned about the Bikeworks accessible cycling club at the Olympic Park, a brilliant social enterprise inspired by the London 2012 Olympic and Paralympic Games, offering free all-ability cycling clubs around London. The cycling club prides itself on being inclusive by specialising in bikes that can be used by a range of people with different needs including, mental health, dementia, physical and learning disabilities. The bikes available for riding these days include regular bicycles as well as adapted and side-by-side tandem bikes (see pictures below) to support shared control and wheelchair accessibility among others. The people who come to ride these bikes include blind and partially sighted, manual and powered-wheelchair users, people with complex needs (cerebral palsy, down syndrome and others).

The club offers free cycling at the Olympic Park on Tuesdays and Thursdays at the Velodrome.

I joined Vijay at the Velodrome, Olympic Park to ride one of the side-by-side tandem bikes. Barring some initial hiccups on my part learning how to use the bike, we eventually took the bike out and rode around the Olympic Park. The easy and smooth movement of the bike gave me the perfect opportunity to ask Vijay about his interest in the Olympic Park and the bike club. He mentioned that the most important thing about riding the side by side as opposed to the more regularly seen fore to aft (front and rear) tandem bike was the sense of agency and control he felt when riding it.

Being in the front, riding next to the pilot (the guide rider), having the same bike handle, pedals, and maybe a slightly more comfortable seat changed the whole riding experience for him. He felt the ability to turn the handle to change the direction, pedal as fast or as slow as he wanted, and pulling the brake made for a more authentic experience than being at the rear of the bike. He also told me he had tried to ride the tricycle the previous week and had a minor accident as he was going too fast and hit a tree but he found the independence and the thrill of riding on his own exhilarating.

Vijay tells me he would love to drive a dodgem/bumper car one day and would welcome more sports and physical activities for disabled people at the Olympic park.

“So many disabled people can’t drive and they would like to experience driving so at least when they come to Olympic park they can drive here with a low risk of getting injured because it’s such a big space . I would love to drive the car and experience it. Someone can guide but I want to control [the car].”

“As a central east London location, Olympic park is the ideal place for communities in east London [and beyond] to visit and enjoy the different activities, the park is big enough to have multiple activities for everyone.”

"If I can try then I put some..like a cricket pitch or tennis pitch or gaming area for disabled [people] and I [would] put accessible [guide] for disabled people so if a disabled person comes to the Olympic park and they want to walk alone so they can easily get around the park."

Having more sport activities for disabled people at the park will engage more people in the community in the Paralympics and also provide opportunities for future Para athletes to practice their skills.

To attract more disabled visitors, the accessibility of the park is paramount in addition to more opportunities for disabled people to participate in inclusive sports and entertainment at the park.

Olympic Park has been designed to be as accessible and inclusive as possible for a wide range of visitors. The park includes a flat walking surface throughout and stair-free access, making it easier for wheelchair and mobility scooter users as well as pushchairs and cyclists. However, as demonstrated by Hasmukh in the video below, the open walking surface makes it difficult for blind people to navigate.

Many blind people, especially those who use a long cane for walking, rely on the accessible infrastructure for navigation. For example, the building line and edge of the pavement are helpful clues that enable walking in a straight line. Therefore, the open wide flat surface in parks and open spaces can be particularly challenging for blind people to safely navigate and walk in a straight line.

“When I walk in the park, I use the edge of the grass to follow along the path in a straight line.”

A similar experience has been shared with me by other blind people I have worked with in the past through my research and volunteering as a sighted guide with Royal Society for Blind Children and Guide Dogs. New apps and devices are being developed that use the gyroscope and positioning sensors to indicate when the user is veering from the straight path. Technologies are brilliant at making life easier but in my opinion, public space accessibility is a fundamental right and the burden of inclusive design should fall on the government rather than the public to make accommodations for diverse needs. In some cases, a simple tactile guide can be extremely freeing for blind people to feel their way along a path.

In this video, Hasmukh is demonstrating how beneficial a tactile guide line, which we discovered at the entrance of the Olympic park near the Information centre walking over from the Westfield Stratford Shopping Centre (“The Street”), can be for a blind long cane user. It wasn’t clear whether the tactile line was installed for accessibility as it only existed for approximately 100ft at the entrance of the park and did not particularly lead anywhere. Despite that, Hasmukh found it very useful and was keen to have such tactile guide lines in more public spaces to make them accessible for blind people.

“It’s great because I can feel the line clearly, I can also walk faster. They should have lines like this everywhere, in parks, in the middle of the train platform so blind people can easily navigate.”

Maryam: I'm right beside you.

It was a terrific experience to be able to visit the park and ride the tandem bikes with Vijay and Hasmukh, not the least because I can’t actually ride a bike!! Having a bike co-pilot not only gave a push (literally!) to get the conversation going but also gave a unique collaboration opportunity for myself - a sighted guide, newbie tandem bike pilot, and researcher and Vijay and Hasmukh - experts on their experience as blind individuals and experienced tandem bike co-pilots guiding me on how to ride the bike and setting the pace.

After almost two hours of bike riding, we ended our visit with a light lunch at Pret, chatting about our life in the UK and families back home in India and Pakistan. Many more stories, which I would perhaps delve into in another blog post. The bike-along chats and sharing stories has been the most exciting research work I’ve done and I am incredibly grateful to both Vijay and Hasmukh for sharing their experience and thoughts with me.

As researchers, we have a brilliant opportunity to bring forward and amplify disabled people’s voices to build a greater awareness of the barriers and discrimination faced by disabled people around the world. It matters now, more than ever, to join the #WeThe15 movement and be part of creating a fairer and inclusive world. Are you in?

Special thanks: This community engagement project was funded by the UCL Culture Beacon Bursary which funds projects aiming to advance the practice and culture of public engagement at UCL. 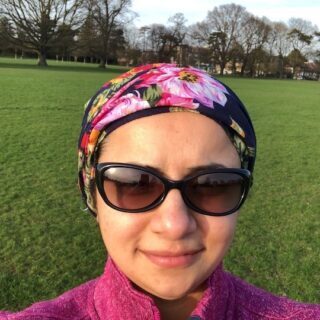